The Nimbus is heavy duty remotely controlled flying-wing aircraft designed as a test and measurement platform for further development of a special flying wing technology. The swept-wing flying wing was designed with a bell-shaped lift distribution and shows excellent flight performance despite higher induced resistance. 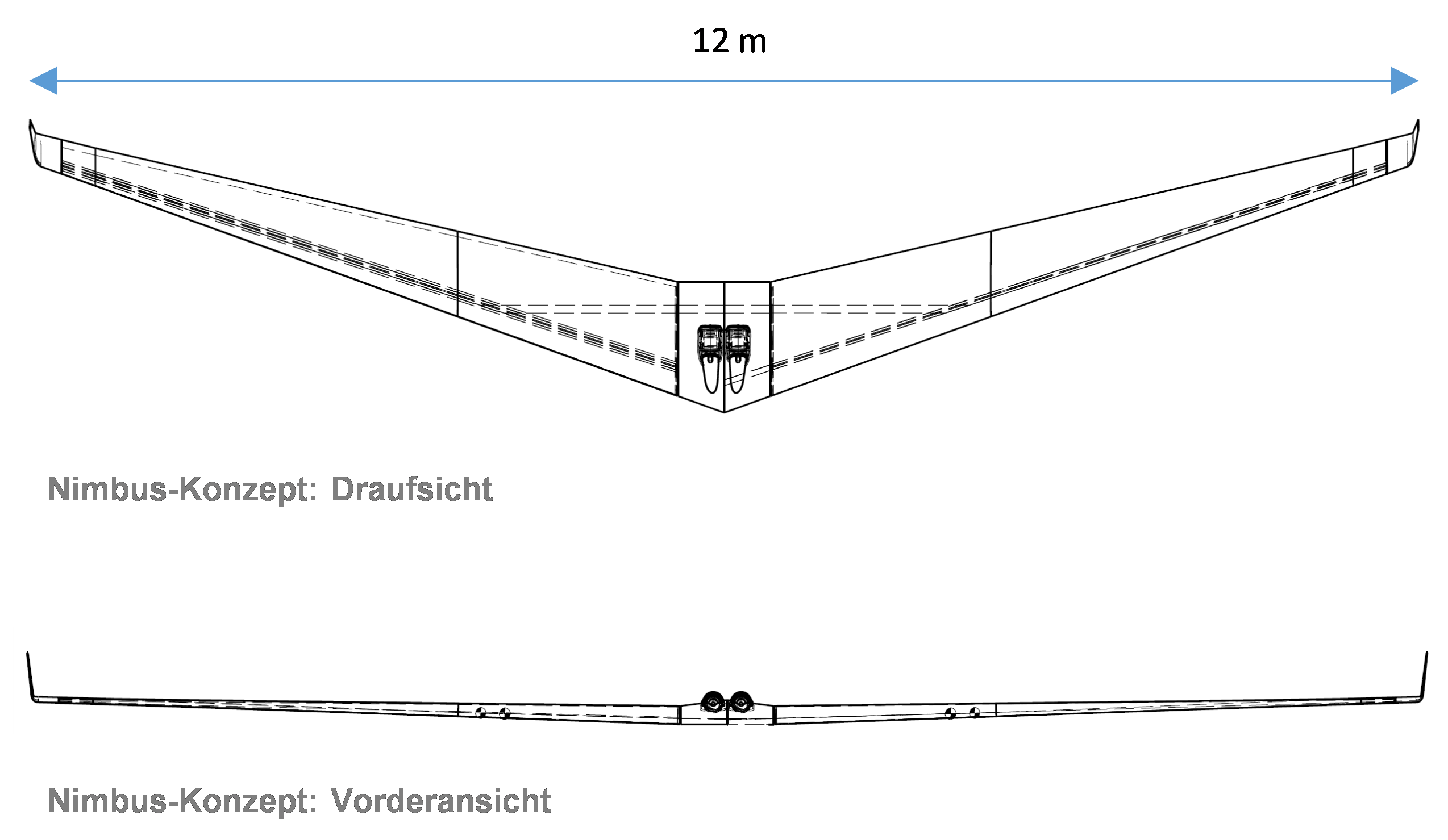 In 2001, the concept, development and construction began, which was rewarded with a successful maiden flight after 8 years.

Link to the video of the certification flight: https://youtu.be/pmPw-P9ZfHY

The Nimbus flying wing project was only possible because of the concept to the technical acceptance by the unique commitment of numerous students. With the initiators and main developers Ulrich Schäfer and Helge Hillreiner, the student developers and constructors of the Nimbus, the Aachen University of Applied Sciences as promoters and the support of Up2-Tec, there is a solid basis for further research and development in the field of flying wing technology.

With this flying wing concept, special aerodynamic theories have been put into practice to ensure safe and stable flight behavior.

The numerically examined and structural-mechanical design of the GFK / CFK composite construction is vibration-proof and incorporates aeroelastic aspects. 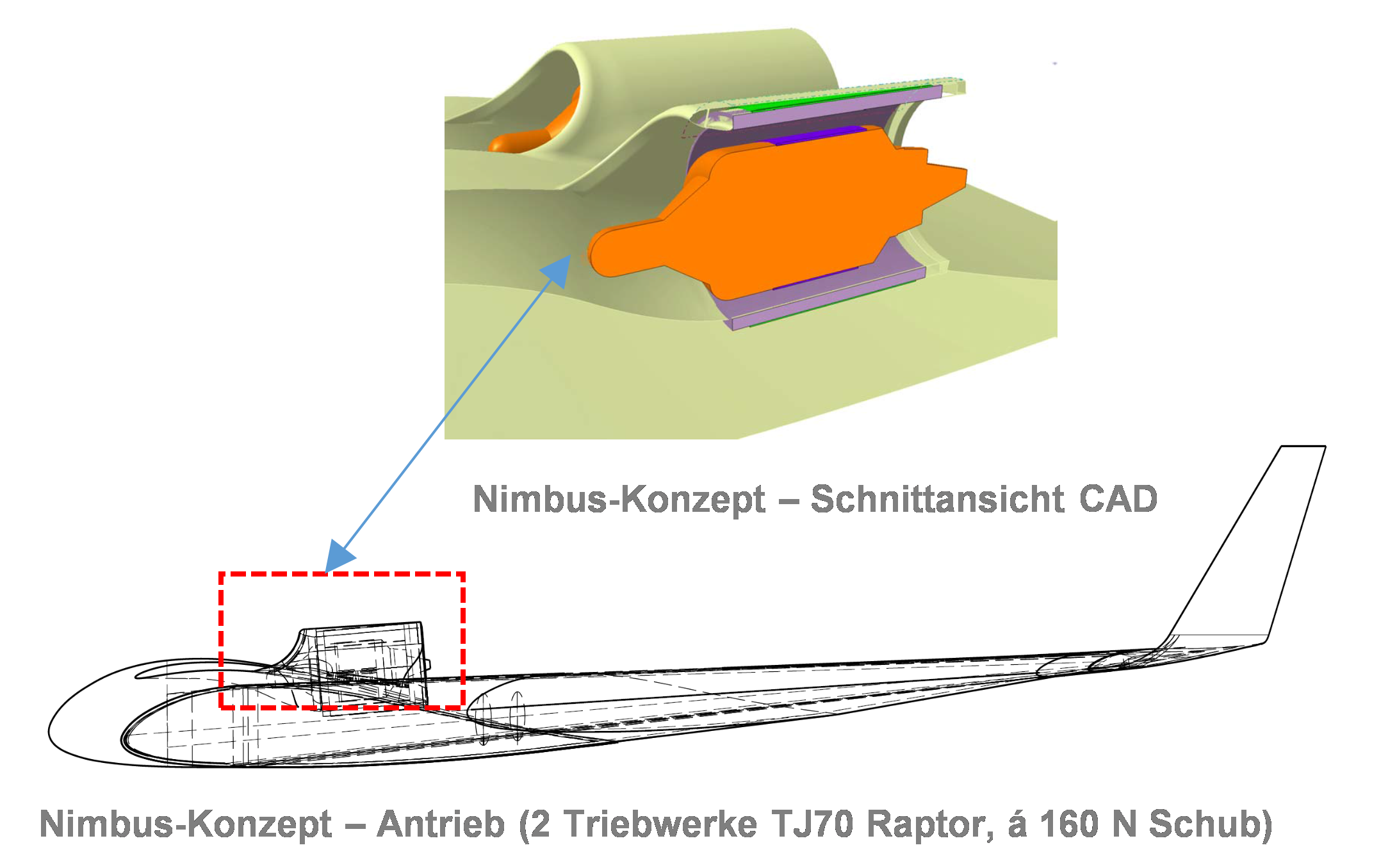 The two engines TJ70 Raptor Frank Turbine provide with each up to 160 N a sufficient thrust.

Further details about the engines can be found at: http://www.frankturbine.com 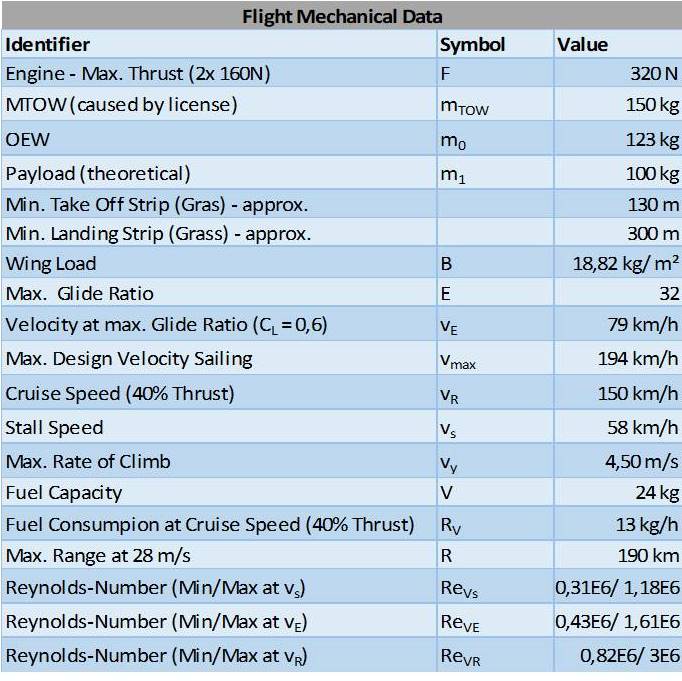 After the completion of the prototype in mid-2009, the flight testing was started. All flight-relevant data was recorded on board and digitally transmitted to the ground station in real time with several video images. Multiple redundant transmission paths of the telemetry equipment support a safe flight. In future tests, the rudder decoupling and, if necessary, the integrated rescue system will be tested.

The remote control is relatively simple and direct, it requires no special control technology or computer support for performing maneuvers.

In addition, a sophisticated wireless measurement technology offers the possibility of continuous monitoring at the ground station. A real-time fieldbus (TTP-A) is available for various measurement and control tasks. 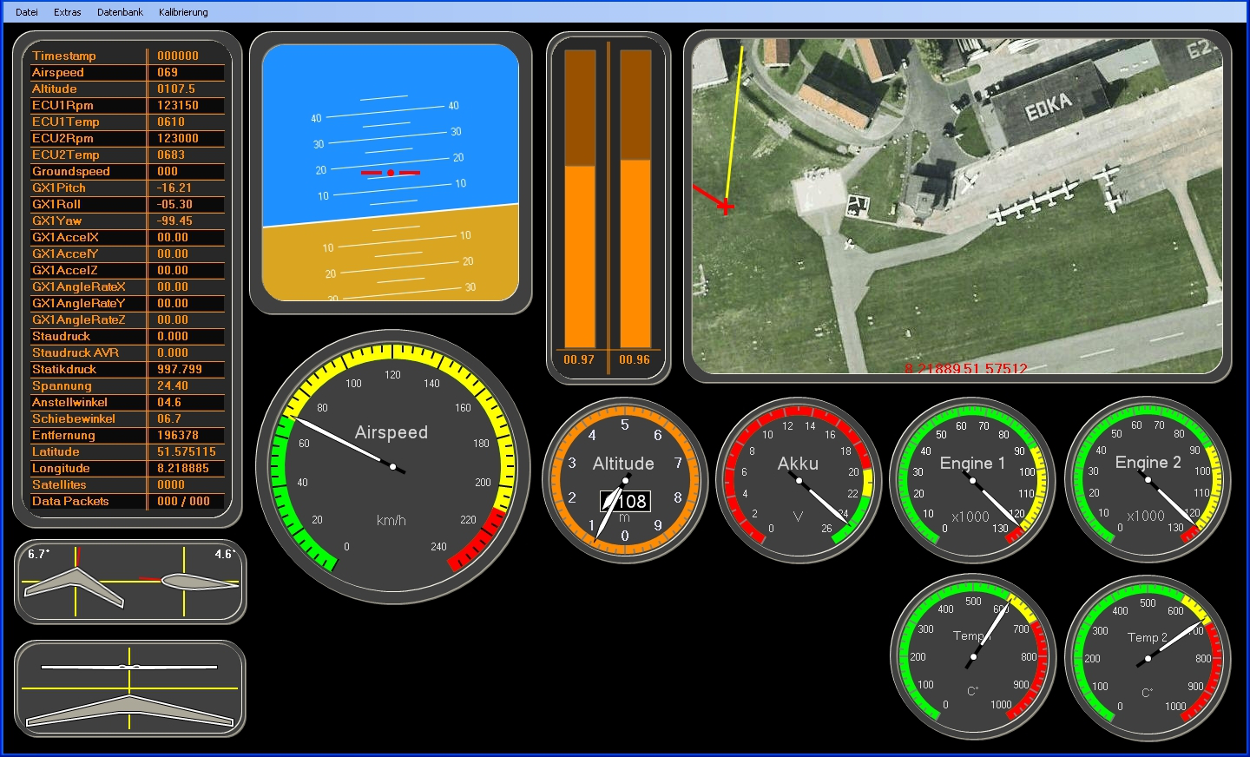 The development of a "mini-digester" plant was inspired by the need for more efficient use of the classical autoclaving process. The principle of controllable resistance heating is used, which, in combination with a pressurized elastomer membrane, can simultaneously press, temper and evacuate a DIN A4 sample. With this system, various types of planar fiber composites can be produced. Laminated glass panes with heating wires can also be processed.

As part of further research, the development of a plant for the production of 3-dimensional molds with flexibly adjustable heating fields is planned. 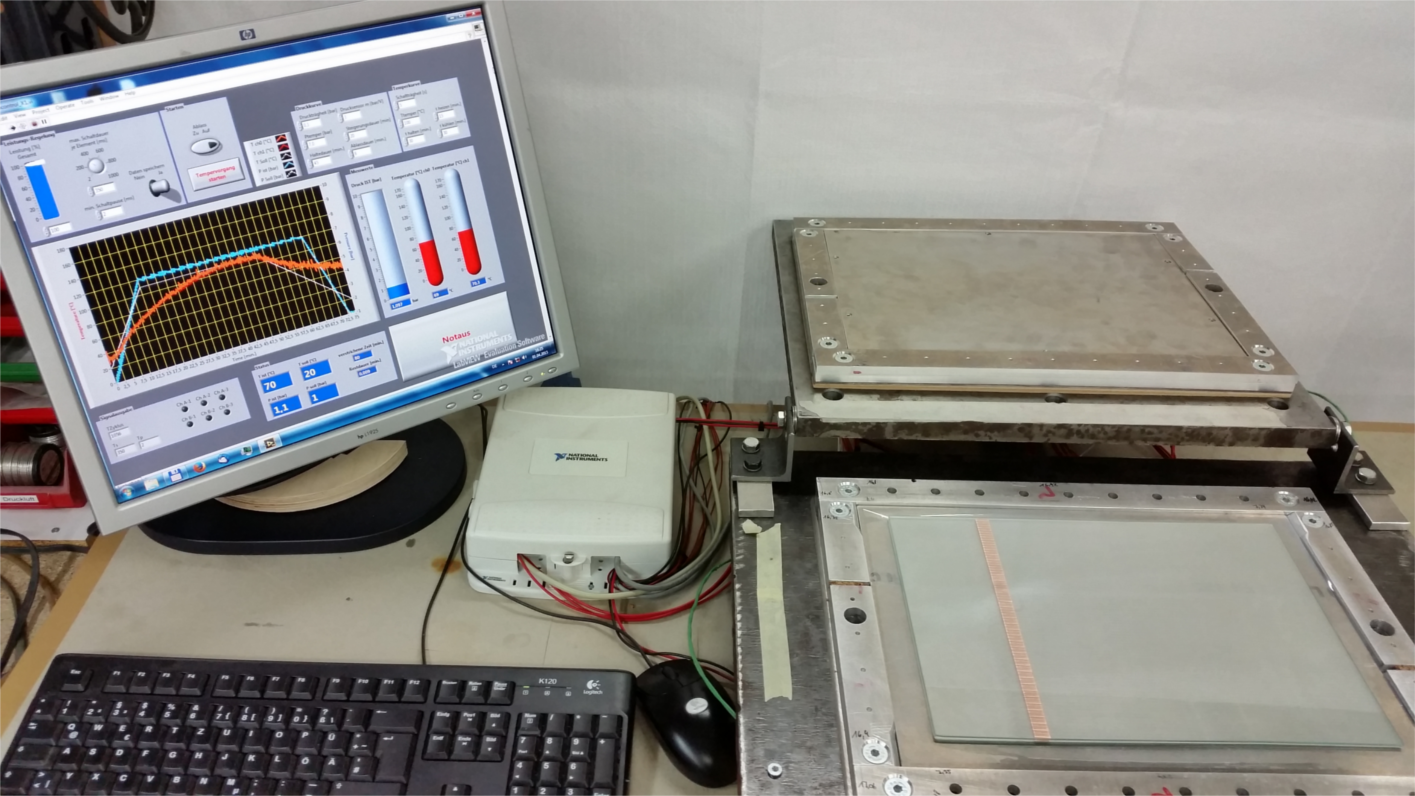 With its excellent flight characteristics, the LS-8 is a unique high-performance model glider and the ideal basis for the development of a test platform.

To carry out various flight measurement tests, the student project Stuko-LuRa is currently producing a remote-controlled model of the LS-8 on a scale of 1: 2, which will be used to test a pilot rescue system for gliders.

In 2004, the drafting of the concept, development and construction began with a scheduled completion in 2016. 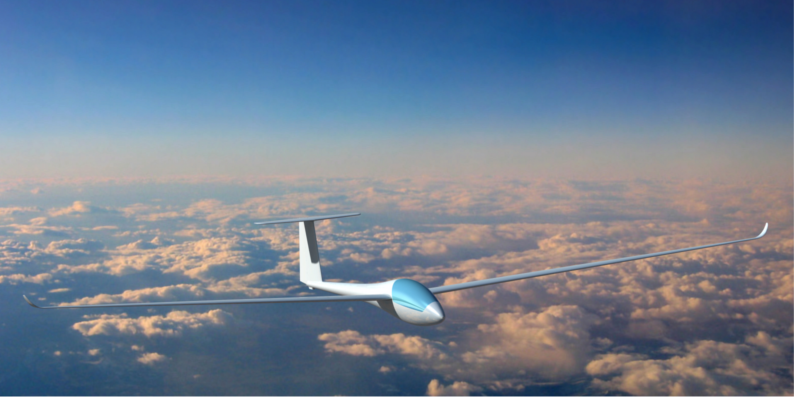 The LS-8 project was made possible from the concept to the manufacture of the individual components only by the unique commitment of numerous students.

With the University of Applied Sciences Aachen as project sponsor, the support of Up2Tec and under the academic direction of Prof. Bauschat, the successor of Prof. Röger, there is a sound scientific and technical basis for further research and development in the field of gliders and pilot rescue systems.

This project still require the support of students. These include study, practical and final theses. If you are interested or have questions we are at your disposal.

prospects for further use of the heavy duty model glider:

In the future, this project will offer study papers on flight performance, strength and "torque budget”.

The development and construction of a large model glider modeled after the LS 8 was driven not only by creating a lightweight aircraft, but rather out of scientific-technical aspects. A research focus of the project are the "pilot rescue systems". Such systems can not be tested with pilots in the development stage, which is why remote-controlled aircraft are used. A true-to-scale model replica, which is remotely controlled and equipped with data acquisition, is suitable for the safe execution of such flight test series. The dynamic behavior of the aircraft is to be adapted to the original, whereby a replica of the behavior of a glider and pilot in the trial is possible.

In order to ensure a similarity in flight dynamics, the mass inertia, which is determined by the mass distribution and the dimensions, must be faithfully adjusted. For the repeatability of the experiments, the entire aircraft is built in negative forms. With a wing span of 9 m, the LS 8 represents a large model that is also available for other flight mechanics examinations and projects. Due to the weight and dimensions, the aircraft is equipped with a retractable engine (electric motor).

The structure-relevant components are firstly computer-aided design (CAD) and used for further investigations of aerodynamic properties (CFD) and strength (FEM). 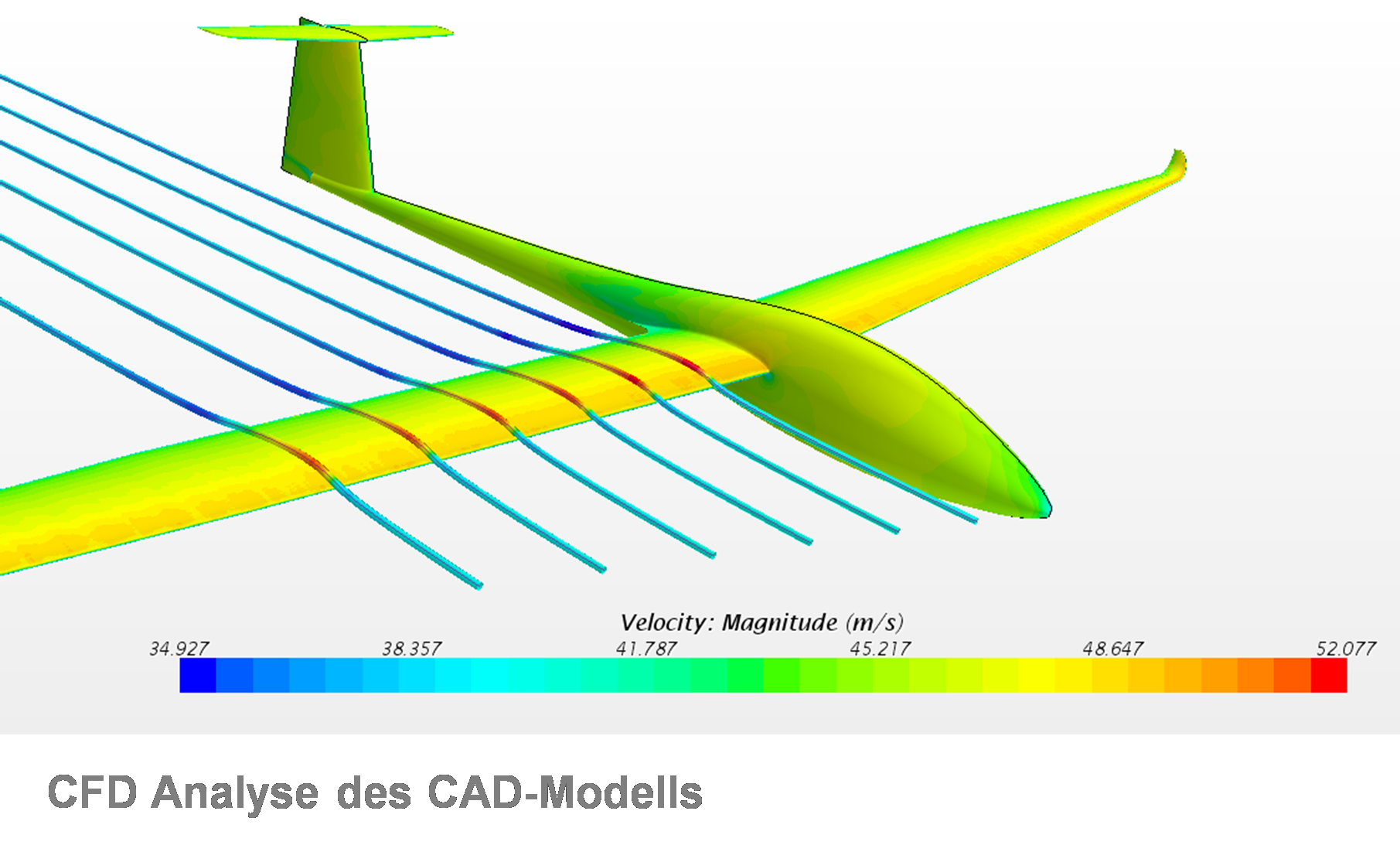 After preliminary dimensioning of all relevant parameters in terms of flight performance and dynamic similarity, CAD design was started. In order to reproduce the original, a realistic model was created that required a complex CAD design over several years. To produce the molds, a G-code is generated, which is required to control the CNC portal milling machine. As a result, minimal deviations between the design and the later component are achieved and a profiled wing contour is guaranteed.

For the planned attempts of the rescue system to be integrated emergency situations are to be brought about, which are expected to lead to damages of the model. For reproducibility of the components, the molds must therefore be particularly durable, which is why they are manufactured in fiberglass construction. In addition there are the - usual in gliding - high demands on the surface quality. Due to their size, the wing and hull shapes presented a particular challenge.

The shapes of the wings are milled from rigid PU foam. Urmodels as a positive mold allow multiple production of the negative molds and also simplify the subsequent work steps. These steps include painting, sanding and finish polishing. From the original models heated forms made of fiberglass are removed. Other shapes are milled in MDF.

Various high-quality negative molds have already been used to produce various GFRP and CFRP components that meet the high demands of the project. These include, for example, the spars, wing shells, tail units and many other small parts.

After making all the components, the model is assembled to complete the first successful test flights following. 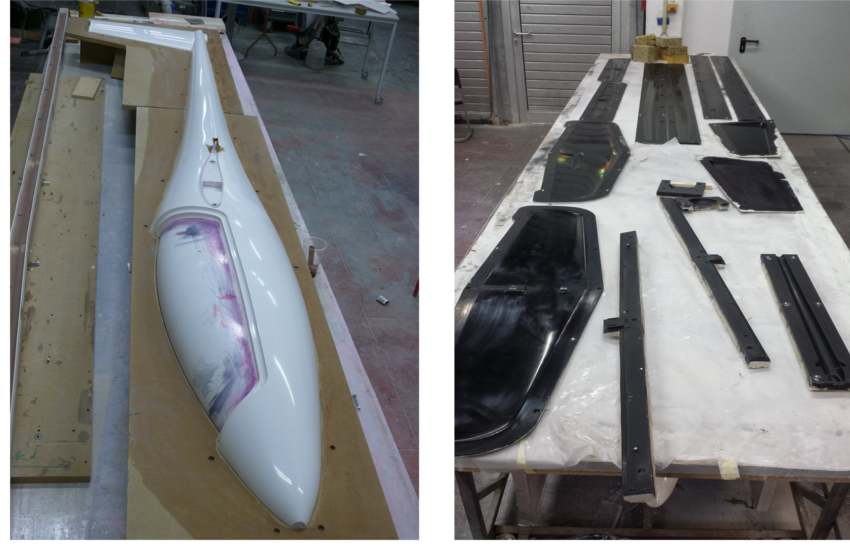 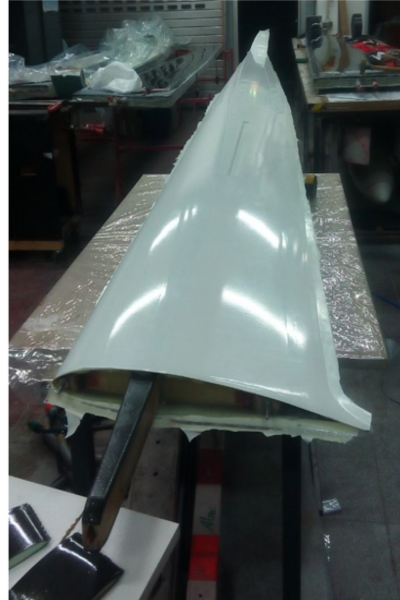 As in the original, the model test aircraft consists of a central fuselage, two wings, a rudder and the tailplane. The structure of the hull is used to adapt various components such as the chassis, the power supply, the telemetry, the data logger and the rescue system. The forces from the lift are transferred to the fuselage via the spars and the lateral force bolts. Again, the simulation results ensure that these loads can be sustained. After completion of the first prototypes, stress tests are carried out, which not only represent a control of the simulation, but also provide proof of the load capacity.

The wings are manufactured in shell construction with the help of negative molds. Based on the laminate calculations and taking advantage of fiber composite properties, optimum strength is achieved with minimal mass. The core material of the sandwich composite is light and sufficiently firm foams.

The spar is untypically made as a particularly torsionally stiff box spar.

The first prototype of a wing is subjected to a fracture test. Here, the load capacity of the wing is detected and determines the load, which leads to failure. Aerodynamic air loads are simulated by clamping the wing at the root and applying loads distributed over the surface.